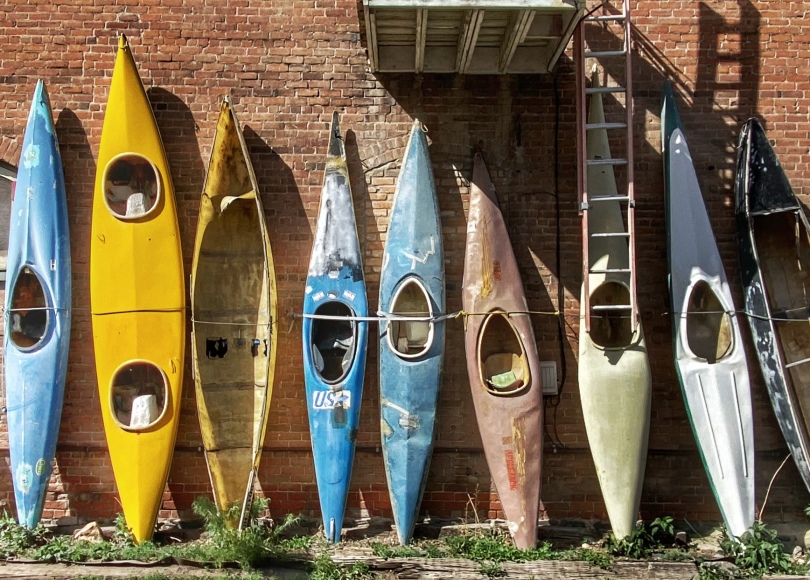 Alright, so I forewent a hair appointment (after 12 weeks) to go on our first road trip during this ‘Vid stuff. Many of you won’t like or appreciate the idea, but wanted to share with you, that it was a great, safe experience. There was no ick, no overcrowded spaces, people were being responsible and we had a blast – the experience wasn’t tainted, nor was it reckless.

A couple of months ago, I booked several weekend trips, hoping by doing so, it would will this quarantine stuff away. One such trip was booked for Memorial Day weekend. I figured it would be a stretch and it was, until it wasn’t.

One of our favorite places to visit is Salida, CO. It’s a simple, cute little artsy town on banks of the Arkansas River known for boating, hiking, fishing and mountain biking. Our favorite little motel, The Amigo Motor Lodge, recently remodeled 4 airstreams, so I booked one – desperately hoping we would be able to escape the confines of our home.

About 2 weeks before the trip, they sent an email saying they would not be able to open and asked, would we like to rebook for another weekend or get our money back? I sat on it for a week, trying to figure out what made sense.

Before I had the chance to respond, they came back to us with the sweetest words ever, “We have been given permission to open Memorial weekend, would you still like to come?” It was a no brainer. A few days later, we were packed and ready to go.

We didn’t really know what to expect when we arrived. They ended up only booking 2 of the 4 airstreams and then every other motel room. All of the common areas were closed, including the lobby. The airstreams themselves are not equipped with bathrooms, but given only 2 were rented, we had a bathroom all to ourselves. It was really nice not to have a neighbor, we actually felt as though we were out on our own – even with the road noise of the busy street.

The town of Salida is really small – population is roughly 6,000. It certainly didn’t feel overcrowded when we were walking around – many people still gun-shy about venturing greater then 10 miles past their home. Plus, because there were tight restrictions on the number of rooms hotels could sell, the number of tourists was greatly reduced.

In order for any establishment to be allowed open in town, they had to pass a safety test with the city authorities. If they passed, a certificate was posted on their door.

All of the shops required masks and the use of hand-sanitizer prior to entering. Good thing stores were open, I was able to get my shop on. What an awesome feeling of SHOPPING in a store again – one of my favorite activities on the planet.

We only chose restaurants with outdoor seating and didn’t entertain anything but a patio as we are still unsure of being confined with other people in a small space. Let me just say, I had the best pizza of my LIFE. Maybe because it was the first one actually served to me on a plate and not a cardboard box. Each table was spaced 6 feet or greater apart, all employees had on masks and gloves. It took forever to be served, but it just didn’t matter to us. We were at a restaurant for the first time in months!

We spent most of our time on the trails, Sean mountain biking and me, trail running. Because we now get up at the CRACK OF DAWN, we were on the trails seemingly before anyone else – hardly anyone was out and about until later in the day.

All in all, we had a great time – it was nice to adventure again and refuel our spirits. Tonight we camp near our home – campgrounds are now open. It may rain/snow/sleet tonight, but I don’t care – nothing will stop us!

Now to get my janky looking hair taken care of – I’m starting to look like a crazy cat lady.

Pick a Language, any Language

Bebopping around NYC ❤️
Great day to be outside!!! North Table Mountain, Golden, CO
Gettin the stink eye 👁
Testing the new phone!
Happy, happy 5th anniversary to the most kind, devoted, gentle, handsome man on the planet! ❤️❤️❤️
Happy, happy new year from our family to yours! With the exception of the past few days of 2021, we had a great year filled with love, new friends, old friends and fun adventures. This is our last NY day in CO as we will be moving to Oregon this summer! ….and who knows, maybe we’ll get hitched!! May you all be blessed with health, happiness and beautiful surprises in 2022 ❤️❤️
The Best way to end an incredible holiday week is with sweet hugs from some of the best littles on the planet, cookies, key chains, super hero book readings, lucky stuffed animal gifts, and pop rocks!! 🙌❤️🙏
Where’s Sean??
…..and we did it with 4 minutes to spare. We had to check out at 10:30! 🙌🙌🙌
Less than 24 hours to finish this 2,000 piece puzzle! Can we do it??
TONS and TONS of snow up here outside Aspen, CO
In case anyone’s in need of some snow ❤️